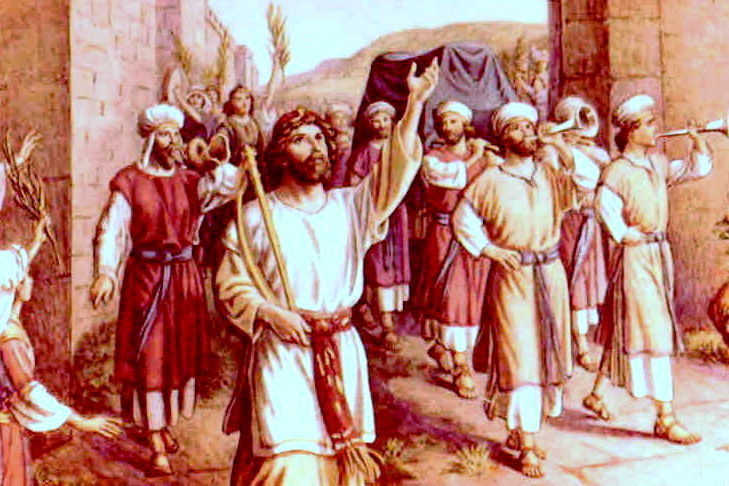 THE SHEPHERD BOY OF BETHLEHEM

WHEN Samuel told Saul that the Lord would take away the kingdom from him, he did not mean that Saul should lose the kingdom at once. He was no longer God's king; and as soon as the right man in God's sight should be found, and should be trained for his duty as king, then God would take away Saul's power, and would give it to the man whom God had chosen. But it was many years before all this came to pass.

Samuel, who had helped in choosing Saul as king, still loved him, and he felt very sorry to find Saul disobeying God's commands. He wept much, and mourned for Saul. But the Lord said to Samuel:

"Do not weep and mourn any longer over Saul, for I have refused him as king. Fill the horn with oil, and go to Bethlehem in Judah. There find a man named Jesse, for I have chosen a king among his sons."

But Samuel knew that Saul would be very angry, if he should learn that Samuel had named any other man as king in his place. He said to the Lord, "How can I go? If Saul hears of it, he will kill me."

Then the Lord said to Samuel, "Take a young cow with you; and tell the people that you have come to make an offering to the Lord. And call Jesse and his sons to the sacrifice. I will tell you what to do; and you shall anoint the one whom I name to you."

Samuel went over the mountains southward from Ramah to Bethlehem, about ten miles, leading a cow. The rulers of the town were alarmed at his coming, for they feared that he had come to judge the people for some evil-doing. But Samuel said, "I have come in peace to make an offering and to hold a feast to the Lord. Make yourselves ready and come to the sacrifice."

And he invited Jesse and his sons to the service. When they had made themselves ready they came before Samuel. He looked at the sons of Jesse very closely. The oldest was named Eliab; and he was so tall and noble-looking that Samuel thought:

"Surely this young man must be the one whom God has chosen." But the Lord said to Samuel:

"Do not look on his face, nor on the height of his body; for I have not chosen him. Man judges by the outward looks, but God looks at the heart."

Then Jesse's second son, named Shammah, passed by. And the Lord said, "I have not chosen this one." Seven young men came, and Samuel said:

"None of these is the man whom God has chosen. Are these all your children?"

"There is one more," said Jesse. "The youngest of all. He is a boy in the field caring for the sheep."

"Send for him; for we will not sit down until he comes." So after a time the youngest son was brought in. His name was David, a word that means "darling," and he was a beautiful boy, perhaps fifteen years old, with fresh cheeks and bright eyes.

As soon as the young David came, the Lord said to Samuel:

"Arise; anoint him, for this is the one whom I have chosen."

Then Samuel poured oil on David's head, in the presence of all his brothers. But no one knew at that time the anointing to mean that David was to be the king. Perhaps they thought that David was chosen to be a prophet like Samuel.

From that time the Spirit of the Lord came upon David; and he began to show signs of coming greatness. He went back to his sheep on the hillsides around Bethlehem, but God was with him. David grew up strong and brave; not afraid of the wild beasts which prowled around and tried to carry away his sheep. More than once he fought with lions and bears, and killed them, when they seized the lambs of his flock. And David, alone all day, practised throwing stones in a sling, until he could strike exactly the place for which he aimed. When he swung his sling, he knew that the stone would go to the very spot at which he was throwing it.

David kills the lion and rescues the lamb

And, young as he was, David thought of God, and prayed to God. And God talked with David, and showed to David his will. And David was more than a shepherd and a fighter of wild beasts. He played upon the harp, and made music, and sang songs about the goodness of God to his people.

One of these songs of David we have all heard, and perhaps know so well that we can repeat it. It is called "The Shepherd Psalm," and begins with the words:


"The Lord is my Shepherd; I shall not want.

He maketh me to lie down in green pastures:

He leadeth me beside the still waters.

He restoreth my soul;

He leadeth me in the paths of righteousness for his name's sake.

Yea, though I walk through the valley of the shadow of death

I will fear no evil; for thou art with me;

Thy rod and thy staff, they comfort me.

Thou preparest a table before me in the presence of mine enemies;

Thou anointest my head with oil; my cup runneth over.

Surely goodness and mercy shall follow me all the days of my life:

And I will dwell in the house of the Lord forever."

Some think that David made this Psalm, while he was himself a shepherd, tending his flock. But it seems rather like the thoughts of a man than of a boy; and it is more likely that long after those days, when David was a king, and remembered his youth, and his flock in the fields, that he saw how God had led him, just as he had led his sheep; and then he wrote this Psalm.

But while the Spirit of God came to David among his sheep, that Spirit left King Saul, because he no longer obeyed God's words. Then Saul became very unhappy, and gloomy in his feelings. There were times when he seemed to lose his mind, and a madness would come upon him; and at almost all times Saul was sad and full of trouble, because he was no more at peace with God.

The servants around Saul noticed that when some one played on the harp and sang, Saul's gloom and trouble passed away, and he became cheerful. At one time Saul said:

"Find some one who can play well, and bring him to me. Let me listen to music; for it drives away my sadness."

One of the young men said:

"I have seen a young man, a son of Jesse in Bethlehem, who can play well. He is handsome in his looks, and agreeable in talking. Then I have heard that he is a brave young man, who can fight as well as he can play; and the Lord is with him."

Then Saul sent a message to Jesse, David's father. He said:

"Send me your son David, who is with the sheep. Let him come and play before me."

Then David came to Saul, bringing with him a present for the king from Jesse. When Saul saw him, he loved him, as did everybody who saw the young David. And David played on the harp, and sang before Saul. And David's music cheered Saul's heart, and drove away his sad feelings.

Saul liked David so well that he made him his armor-bearer; and David carried the shield and spear and sword for Saul when the king was before his army. But Saul did not know that David had been anointed by Samuel. If he had known it, he would have been very jealous of David.

After a time Saul seemed well, and David left him, to be a shepherd once more at Bethlehem.